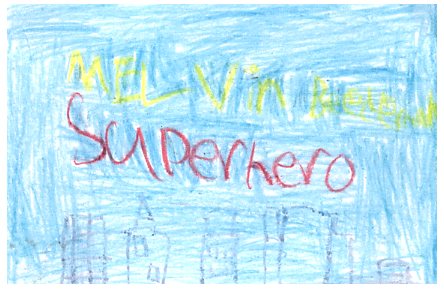 Punch! Do you like superhero books? If you do, then Melvin Beederman Curse of the Bologna Sandwich written by is the book for you. First we meet Melvin Beederman who does not feel like a superhero. He can’t get off the ground and fly in one try and he can’t stop moving trains. In the beginning of the story Melvin graduates from the superhero academy at the top of his class. He graduates at the top because he’s smart and he follows the superhero code not because he’s got great superhero powers. He knows the right thing to do at the right time. Melvin is sent to Los Angeles to stop bad guys. He finds a hideout treehouse to live in. Soon he hears, “Help, stop, thief!” He picks up the thief’s car and stops him. Later on in the story he loses his superhero powers because in a mix-up a young girl named Candace Brinkwater ends up with his cape. He hears about the McNasty Brothers who are notorious bank robbers, but he can’t stop them without his cape. He and Candace meet and Melvin realizes that she has his cape. He also realizes from his favorite show, The Adventures of Thunderman, that he needs a partner. So he asks Candace and she says yes. He and Candace go to stop the McNasty Brothers, but they have a bologna sandwich which is Melvin’s weakness. In the end, the McNastys tie Melvin and Candace to a pole. Will they escape? Read the book to find out.

Melvin Beederman is a great book. I think it has amazing illustrations. There’s one that shows Melvin running slowly because he lost his superpowers. He was in a race with junior high runners because he was testing to see if he had lost his super power speed when he lost his cape. My favorite part is when Melvin can’t get off the ground when he tries to fly even after 5 or 6 tries. I like it because the narrator said, “Spat, Thud! Kabonk!” every time he fails. I learned that you should never give up. The McNastys tied Melvin and Candace to a pole and they were powerless inside a building that was going to be destroyed. They were unable to move because there was a bologna sandwich and that was Melvin and Candace’s weakness. Melvin eats the sandwich which gives him energy and he snaps the rope that tied them up. They miraculously escape and they stop the train the McNasty’s are on. Melvin then picks the McNastys up and flies them to jail by the collar. Melvin is determined and Candace is a helpful sidekick. Together those traits add up to make a great team.

I think that third to fifth graders would like book. It is very funny and long, but not too long. I think people would like this book because it’s unique. It’s unlike any other usual superhero book.