American Girl: Grace Stirs it Up

American Girl: Grace Stirs it Up 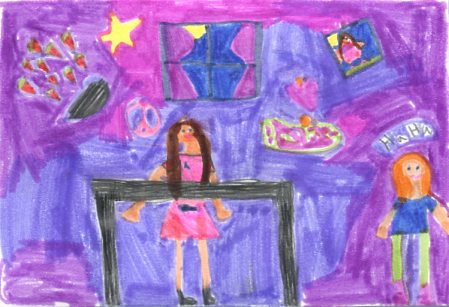 Do you like to giggle? Then you will love Grace Stirs it Up. The characters are Grace, Grace's bffs, Mr. Thomas, Mrs. Thomas, Grace's uncle, Grace's aunt, Grace's cousins and Grace's dog, Bon Bon. Before Grace goes to Paris, she does a business with her friends. On summer break Grace then goes to Paris. Grace gets to work at a bakery with her uncle. Grace meets a dog. When Grace comes home from Paris, her cousin brings Grace the dog. Before Grace goes to Paris, Grace's grandma gives her a charm bracelet. Her cousin gives her a charm for her bracelet of her dog Bon Bon.

I think you would like this book because it is funny. The reason I think this book is funny is because Grace spills strawberries all over the place. Another reason you would like this book is because there's a lot of details. For example, the author writes "When we reached the security guard we showed them our passports and boarding passes. Then mom removed her shoes and put them on the conveyor belt. From her shoulder bag, she removed her laptop and set it in the plastic bin on the conveyor belt." The author could have just said they put their stuff on it, but instead she wrote what they were putting on. Another reason I think you would like this because is because it is fun to read. When I am reading this book I am feeling like it is actually happening and I am visualizing the characters and the setting.

I would recommend this book to second to fourth graders because it's a shorter chapter book. Do you think you would like this book?