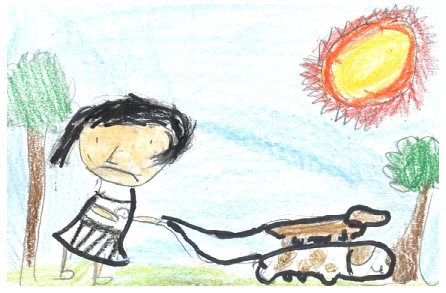 Lulu Walks the Dogs is a very entertaining book by Judith Viorst and illustrated by Lane Smith. It is about a character named Lulu who is very spoiled, but persistent. Lulu wants a special “thing” but her parents say the “thing” is too expensive. Lulu tries to persuade her parents to not take her to the dentist and she will only eat one meal a day to save money for the “thing.” But her parents keep saying no, but they suggest she can be more like Fleishman. Fleischman is a kind, helpful neighborhood boy that Lulu dislikes because he is so perfect and the parents adore him. Lulu doesn’t like that idea, but she still goes with it. She thinks about walking dogs. She thinks it’s easy. She gets three clients. Monday is her first day on the job. Oh, no! The dogs aren’t behaving! Brutus wrapped Lulu to a tree. Pookie is yelping and Cordelia is hiding. Will Fleischman come and help Lulu or will Lulu be there for a long time? And, what is the “thing”? Read the book to find out.

In my opinion Lulu Walks the Dogs is very funny. My favorite part is when Fleischman doesn’t come to help her walk the dogs and Lulu buys cheap treats. Brutus refuses to follow them. Lulu buys a plastic flute, but Pookie wouldn’t stop yelping. She only yelps harder. Lulu bought a beginners French book, but Cordelia didn’t understand Lulu’s French or just ignores her. I think Lulu is ungrateful. She doesn’t appreciate Fleischman who helps her for free. She threatens to throw up on him if he says they make a good team. My favorite illustration is when Cordelia’s owners are looking for her in their messy front yard because it really matches the text. It has a bathtub with a shower, a broken reclining chair, a TV, and more useless junk. Lulu Walks the Dogs is a very enjoyable book. I think you will enjoy it too.

I would recommend Lulu Walks the Dogs to readers 7-12 years of age. Also readers that like funny books with characters that learn important lessons in surprising ways would like this book as well. Lulu learns to be grateful and kind, well sort of. Judith Viorst is a great author because she uses good words to describe the characters and what they do. She gives Lulu attitude. She writes hilarious scenes. One example is when the dogs aren’t behaving and another is when Brutus slobbers all over Lulu. I think Lane Smith is a great illustrator because he adds really great details to his illustrations and nothing is missing. They are descriptive and funny, and they match the text. I enjoyed this book, and I hope you will read it and enjoy it too!