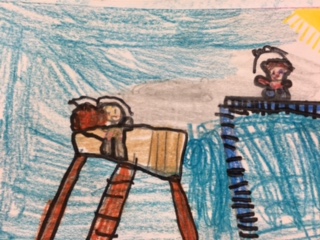 Neil brought his wiggle ferret to school because it was Crazy Pet Day. His ferret was named Mr. Wiggles. A.J. and Andrea were fighting because they both wanted to be president. They solved the problem by getting a dollar from the mayor. Mr. Kluts said that nobody won. But then he said tha Mr. Wiggles won and Neil said, "Hooray."

My favorite part is when A.J. kisses a baby because everyone wants the thing that A.J. has. My favorite character is A.J. because he is funny. This story relates to my life because we had an election in class. The pictures did not help me understand the story.

Other people should read this story because it will make them laugh. It has crazy, funny, and cool characters.