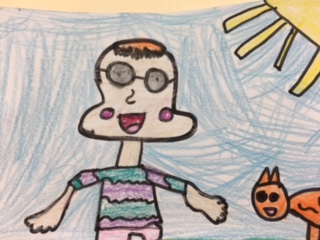 Mr. Putter and Tabby went outside to rake the leaves in fall. While he was raking leaves, Mr. Putter heard the school bell ring. Ding. Dong. Ding. Dong. Suddenly he remembered when he was in school. He wanted to go to school again. He told his neighbor, Mrs. Teaberry, that he had an idea. He said, "Let's do Show and Tell at school." They brought their pets to school to show the kids. Then they had a fun time.

My favorite part of the story is when Zeke ate all of the cupcakes because it was funny. My favorite character is Mrs. Teaberry because she has a great dog. This story relates to my life because I love dogs too. The story did not help me at all.

Others should read this story because it is hilarious. The characters are awesome and cool.