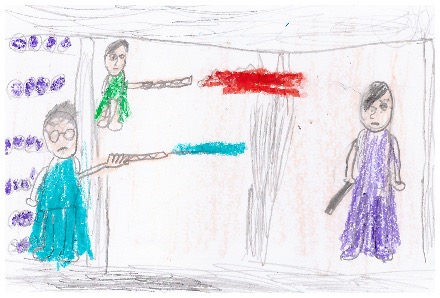 KABOOM!!! Come to the wizarding world in London to see the epic battle between some Hogwarts students and Death Eaters in Harry Potter and the Order of the Phoenix by J.K Rowling.

To begin with, Harry goes to Sirius’s house because Ron and Hermione are there. Later on, Harry learns about the Order of the Phoenix which is a society fighting against Voldemort. When Harry, Ron, and Hermione go back to Hogwarts, Umbridge arrives. She is a really unfair teacher. She can fire teachers at will. Dumbledore is soon forced to leave the school so Umbridge becomes headmaster. Later, Harry forms a group called Dumbledore’s army. Then, when Harry goes to sleep he has a dream. He dreamt that Sirius was in trouble and Harry needs to help him. Harry and some members of Dumbledore’s army come with Harry to the Ministry of Magic to save Sirius. In the end, it turns out it was a trick. Sirius was never really there and Harry plus some members of the Order of the Phoenix come to help. Sirius ends up getting pushed into the veil of disappearing and dies.

In addition, I thought this book was very interesting. When I was reading it I thought I would never put it down until I finished it, even though it is such a long book. It was also a book with a lot of suspense. I felt eager to read the rest of it with every new event. I thought it was a little dark too but that’s why is was so creative. This book made me wonder if it was a trick that Voldemort set up so he could try to kill Harry. They are the characters that represent good and evil in the entire series.

In conclusion, I would recommend this book to 12 to 15 year olds. If you enjoy the Harry Potter books, you should definitely give this one a try!