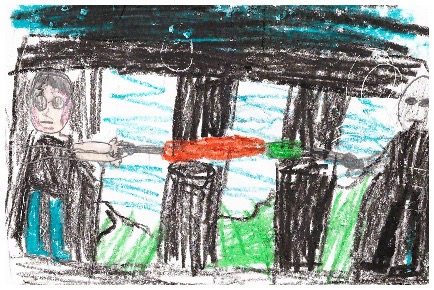 Flash! Come help Harry Potter, Hermione Granger, and Ron Weasley in their journey to find and destroy the Horcruxes in Harry Potter and the Deathly Hallows by J.K Rowling.

To begin with, this story is about three friends on a journey to destroy all seven Horcruxes (parts of a soul hidden in an object to make you immortal) and find and kill Voldemort (an evil wizard who wants to kill Harry). First, Harry is at home and all his friends come to help him get safely to the Tonks’s house. They all ride on broomstick and all take a potion to look like Harry so the Death Eaters (Voldemort’s servants) won’t know who to attack. On their way there, Hedwig (Harry’s owl) gets killed by a curse and George Weasley loses an ear. Next, Harry, Ron, and Hermione camp out. Ron leaves Harry and Hermione at the camp because he is mad at them. After Ron leaves, Harry finds a mysterious patronous (cast by Snape) and follows it to a lake. Inside the lake is the sword of Gryffindor the only thing that can destroy Horcruxes. Harry decides to jump in the lake but he drowns! Just then Ron comes back and pulls Harry out of the water, gets the sword of Gryffindor and then there is a very exciting ending!

In addition, I thought this book was very creative and a bit intense. This is because the characters were so different from others I have read about and the events were so suspenseful. When I was reading this book I could not even put it down. This book was also the best out of the entire Harry Potter series. My favorite part was when Harry figures out there is a part of Voldemort’s soul inside him and he needs to be killed by Voldemort. When all the students find out that Harry is dead, they are all scared and sad. Just then Neville Longbottom gives a speech. He says “People die every day. Friends, family. Even though Harry is dead, he is still with us in our hearts, and we will keep fighting until the very end.” Then Harry jumps up and surprises them all! I can’t believe that Neville was so brave to stand up to Voldemort when this happens. There was one person who changed in this book and that was Snape. When Harry took his memories it turns out that Snape was trying to protect Harry, and this was an important part that Harry didn’t realize at first.

In conclusion, I recommend this book to kids or teenagers ages twelve to nineteen. It is better for older kids because of the intensity of the events and characters! Get ready for an adventure with Harry Potter!