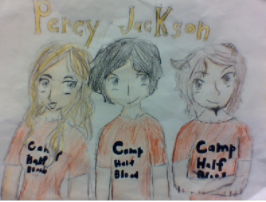 Percy had a lot of weird stuff happen in his life but the worst is when one teachers tried to attack him and his pen turns into a sword. Then he find out is best friend is half goat. His mom tries to take him to this camp. But a minotaur attacks them sort of killing percy's mom. Percy defeats the monster and gets knocked out. He finds himself in a weird camp for people called half bloods. Soon he learns that half bloods are the sons and daughters of god and goddesses. He finds out he is the son of Poseidon the god of the ocean. Then gets blamed for stealing Zeus’s lightning bolt. He tries to deny it by trying find it with a girl named Annabeth and his friend Grover.

I like this book because it is very funny and it has lots of lovable characters. Grover is lovable because he is nice and loyal. It's a great story with lots of action and fun. I love Percy the best because he is always confused and sarcastic like me. I like how Rick Riordan makes the gods and goddesses just as funny as the main characters. The Red Pyramid, by Rick Riordan, is a lot like this book. Percy is about Greek gods but The Red Pyramid is about Egyptian gods.