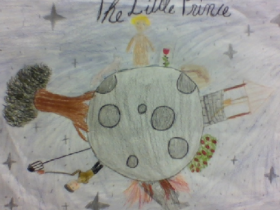 The Little Prince is about a young boy who lived on his own asteroid called Asteroid B-612 one day he noticed a sprout in his asteroid he kept watering it over the days and he noticed there was some wind so he put a glass cover over it and one day it was a beautiful rose. He talked all day with this rose and loved it like a sister. One day the rose said “ you need to go explore the universe” “Are you sure?” said the Little Prince “ Yes” said the rose so off he went meeting many people on the way, and he ended up taming a fox! He made it to earth and landed in the desert and met a man. The Little Prince called him “The Pilot” and The Pilot thought The Little Prince was quite a character. They went on adventures together and on their last day the little prince decided he wanted to go home in order to do that he had to...

Nope not gonna tell you! You have to read the book to find out. I really enjoyed this book especially when I was younger my dad read it to me. I felt like it had a very important lesson: there are friends everywhere you just have to look for them. I think it is a good book to be read to. It also was a book that you could cuddle up on the couch and read straight through it. My favorite part was when the fox and the prince met for the first time. It was cute because the fox was so nice to him. This book made me feel happy.