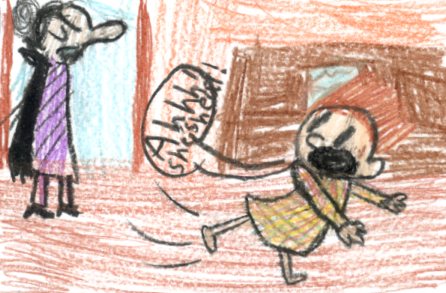 In Dory Fantasmagory, first, Dory has a brother named Luke and a sister named Violet who don't play with her at all. Well Dory is in luck because she has a lot of other things to do with her imaginary monster friends. Next Dory was sleeping on a hammock when all of a sudden her fairy godmother jumped out of the tree! When Dory found out that she had a fairy godmother she wanted to turn into a dog, so her fairy godmother did that. Last when Dory got to know her fairy godmother better her brother and sister made up a monster named Mrs. Gobble Gracker. Dory thought she was bad so she made Mrs. Gobble Gracker a poison soup. Then Luke and Violet dropped Violet's favorite bouncy ball in the toilet, so Dory got it out. Violet and Luke were so amazed they let Dory play with them and they all lived happily ever after.

I like how Dory Fantasmagory's fairy godmother came, but he did not look like one at all. He just looks like a hairy guy. Dory's (non) fairy godmother had an elf hat, beard mustache, no dress and he is not a girl. As you can see this is a very silly part. I like how Dory is so nice to her brother and sister but they're not even nice to Dory! Since Dory's brother and sister don't like her, she plays with her imaginary friends. My favorite part is when Dory gets the bouncy ball from the toilet because it is really funny! Another one of my favorite parts was when Dory meets the fairy godmother is very funny! I think the illustrations are like my drawings sometimes, and I really like that a lot! There are illustrations on almost every page!

I think kids who like funny books might want to read Dory Fantasmagory because kids who like making up funny things will find that this book is filled with it!