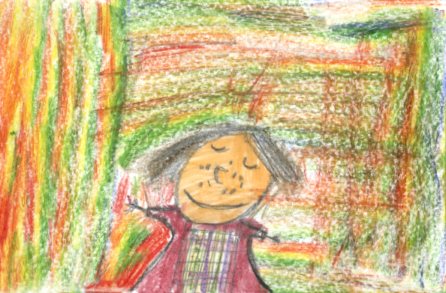 In the book Dory Fantasmagory Dory is a lonely girl. Dory has a big imagination but her brother and sister will not play with her. Next Dory pretends to be a dog at the doctor’s office so her brother Luke will play with her because he wants a dog. After that Dory's brother and sister make up an evil character named Mrs. Gobble Gracker. Dory gets scared because she thinks Mrs. Gobble Gracker is real so she makes up a character named Mr. Nuggy to make a poison stew to get rid of Mrs. Gobble Gracker. Mrs. Gobble Gracker comes over for dinner! She eats the poison stew and leaves! The next day Dory's sister said she lost her doll but actually had it the whole time! While Dory was being tricked into looking for the doll, she found her sister’s old bouncy ball. Dory gave the ball to her sister, Violet, and Violet played catch with Luke but they dropped the ball in the toilet! Then Dory got it out and they all played together.

I liked when Dory thought she was making a poisonous stew for an evil made up character named Mrs. Gobble Gracker with her imaginary gnome friend Mr. Nuggy. When Dory thought she was done making her imaginary stew, Mrs. Gobble Gracker came over for dinner! Mr. Nuggy left and Dory brought down the stew. Mrs. Gobble Gracker came and ate the "soup". Clearly this part was very funny! Some of the characters in Dory Fantasmagory that I enjoyed were… Dori, Mr. Nuggy and Mrs. Gobble Gracker. I enjoyed Dory because she is not like a person you would meet every day and because she has a big imagination. I liked Mr. Nuggy because his appearance is very different and he is very nice. Mrs. Gobble Gracker had some funny parts in the book like when she was eating gobble crackers! These are the reasons I like these characters! My favorite part in Dory Fantasmagory is when Dory finds her sister Violet’s ball and Violet goes to play with her brother Luke. Violet threw the ball to Luke and Luke missed it. The ball went into the toilet! After that, Dory goes and gets the ball out of the toilet. After Dory got the ball out of the toilet they all play together! This was my favorite part because Violet and Luke were being very mean to Dory and they finally played with her!

I recommend this book to 2nd and 3rd graders that have a great imagination and for young children no younger than four. This book is better for students with great imaginations and younger children because they will find this book interesting. There are a lot of fun made up creatures in this fun-filled book!