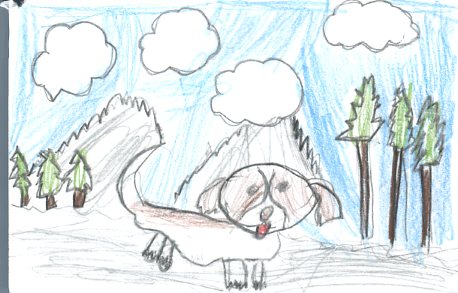 There was a boy named Werner who had a dog named Barry. They lived up in the mountains in a monastary with many St. Bernards. They trained all the dogs to rescue people when they are lost in the snow. Barry was Werner's favorite dog and the best dog for the job. One day, Werner and Barry went to rescue a boy who ran off into the mountains. Barry was the first dog to find the boy, but Barry was stabbed by the boy because the scared boy thought that Barry was a bear. Barry was the bravest St. Bernard ever.

My favorite part is when the dog licked the boy and tackled him because it was very nice to have a dog that cared a lot. My favorite character is Barry the dog because he helped people. This story relates to my life because I think my dog can save me. The pictures help tell the story because it it showed when Barry scared the robbers.

I think others should read this story because it shows you can be brave like Barry. It's an awesome book.