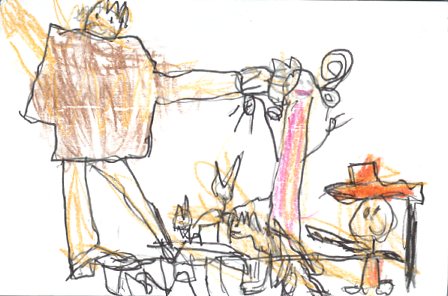 Henry and Mudge are going to Mrs. Hopper's house because Henry's parents are going to a Valentine's party. They are scared to go to Mrs. Hopper's house. When they get there, they think that her house is very cool. She takes them to another room and shows them some old costumes. They all try them all and then Henry's parents come home. His parents are surprised to see them in the costumes.

Our favorite part is when Henry and Mudge show his parents he costumes because Henry's parents are surprised. Our favorite character is Henry because he is hilarious. This story relates to our lives because we have dressed up in costumes before. The pictures help tell the story because some people can't read the word.

I think others should read this story because it's a great book. It is entertaining, hilarious, and interesting.