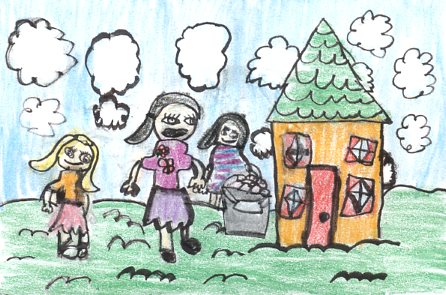 Bean and Ivy don't like each other. When they first met, they both thought each other was weird. They they got to know each other and got along. Bean and Ivy played together and were thinking about playing a trick on sister Nancy. Ivy turned into a witch and they wanted to play the dancing spell on Nancy. Bean and Ivy have many adventures.

My favorite part was when the worm went into Ivy's mouth because it made me laugh. My favorite character is Bean since she threw the worm at Nancy's mouth. This story relates to my life since I've cried like the girls before. The pictures in the story helped me by showing things that were happening in the story.

I think people should definitely read this story because it teaches you not to say something bad about someone that you haven't met yet. I think this story is awesome and clever and has sly and sneaky characters.