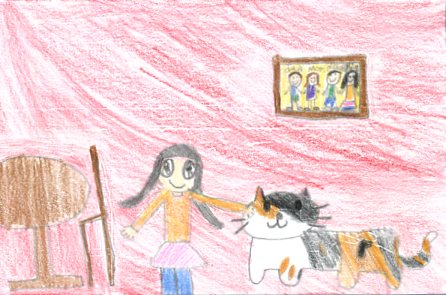 Mia wanted a cat, but her parents wouldn't let her get one. Then on day when Mia came home from school, she heard a meowing sound, but all she saw was something glowing in the trash can. Mia found out it was a cat and that it was hurt. Then she talked to her dad and he said they could help the cat until it got better, but could not keep her. Mia named the cat Callie and fed her food. She played with her and took her to the vet because Callie's paw was hurt. Mia went to Mr. Li's store and had a conversation with him. All of a sudden, he paused and said he missed his old cat. So Mia gave Callie to Mr. Li. He was so happy that Mia gave Callie to him.

My favorite part of the story was when Callie went under the car because everyone saw her anyway. My favorite character is Callie because she is adorable. This story relates to my life because I've always wanted a kitten to. There are no pictures in this story.