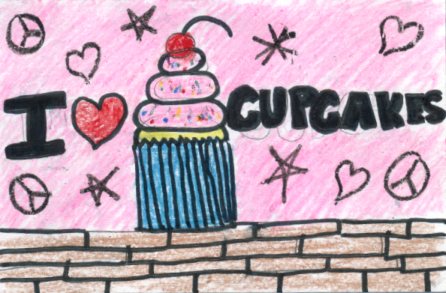 In this book Peace Love and Cupcakes by Sheryl Berk and Carrie Berk, a girl Kylie opens a Cupcake Club and spends a lot of time with her girlfriends! In the beginning, Kylie doesn’t belong in a club or anything so that’s when, she decides to open a Baking Club! But there’s only one problem she needs to find three people to join the club! In the middle she finds Jenna, Lexa, and Sadie to join her club! They try baking chocolate chip muffins but it doesn’t work out! So they deiced to make just cupcakes, so they called it the cupcake club! But Meredith (Kylies bully) is in her way! In the end, they have a contest to raise money for the school. They have a lot of orders and get tired out. Meredith gives Kylie real revenge. Will Meredith’s revenge end the cupcake club? Kylie gets back on Meredith and once she blows out that candle it’s a disaster! Will everyone find out it was Kylie or will she tell Meredith and her parents? Will the cupcake club still be in business? Will Meredith stop bulling Kylie? Will Meredith and Kylie be friends? Well… you will have to find out!

In my opinion, Peace Love and Cupcakes by Sheryl Berk and Carrie Berk is an AWESOME book! To begin with, Kylie the main character is very friendly. She always tells Jenna, Lexa and Sadie to always never give up! My favorite part was in the end and when it was Meredith’s birthday party. It was a disaster! All in all, I learned that if you get someone they will get you back.

Do you enjoy cupcakes problems and realistic fiction? If you do, then Peace Love and Cupcakes by Sheryl Berk and Carrie Berk is just the right book for you! I recommend this book to people who are growing bakers and people who are 8 -11 years old. If you just started reading it you won’t want to put the book down!