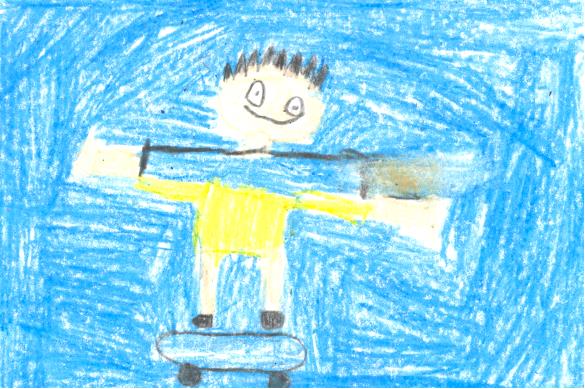 Do you like selling things? What about skateboards? If you do, you should read Big Nate on a Roll by Lincoln Pierce.

To begin with, Nate likes skateboarding. He rides his skateboard all of the time. One day, he is riding his skateboard home. Oh no! His skateboard fell into the water and he couldn’t get it out. Nate was so upset until he came up with a plan. He needed to sell stuff for the Timber Scouts to raise money. The prizes are lame until he sees the grand prize. It is a new skateboard! But Arthur, who wins in everything, really wants the skateboard. Nate decides that he wants to win the skateboard more!

In addition, when I was reading this book I felt worried for Nate. Arthur keeps beating Nate in everything. Nate is afraid that he won’t win the skateboard. The story became exciting when I read the part where Nate had raised $109.08, but Arthur had raised $424.00! I didn’t know how Nate would be able to catch up! My favorite part was at the end of the story when the scoutmaster said Nate and Arthur tied.They did a coin flip to decide who won, but I won’t tell you the ending! This was my favorite part because it showed how hard Nate worked to catch up to Arthur.

In conclusion, I recommend this book to kids who like funny books and kids who are ages 7-12. If you’ve ever had to raise money to help your school or something else, you will also like this book!