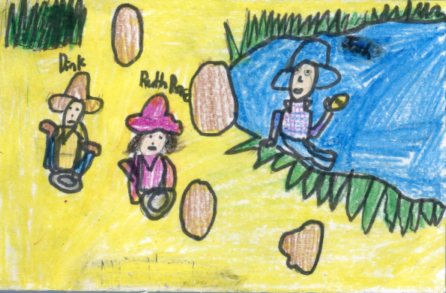 In The Ninth Nugget by, Ron Roy, Dink, Josh, and Ruth Rose go to a western wheat dude ranch in Montana. A guy from the ranch named Jud, comes to pick the kids up. When they get to the ranch, they get settled, and have dinner. The other people at the ranch are, Ed, Fiona, the Clydes, Thumbs, and Jud’s Mom and Dad. A couple of days after, everyone goes to look for gold. Josh finds the BIGGEST piece, but… it gets stolen! So, I guess you will just have to read the book to find out who stole it.

I think The Ninth Nugget, by Ron Roy, is a book that involves mysteries, so when you pick it up you have to be prepared to put together clues. One reason I think that is because, when the nugget gets stolen, and the only people home are, Ma, Pa, Ed and Fiona, Ron Roy makes you think it is one of those people. Another is because, close to the end of the story, whoever stole the nugget doesn’t want Dink, Josh, and Ruth Rose to walk close to her/him. One last reason I think that is because whoever stole the nugget is acting the most suspicious of everyone. I think anyone who likes mysteries should read this book.

In my opinion, this book was an awesome book. One reason is because Josh found what he was looking for. Then, the nugget was stolen and the characters needed to search for it. Will they find it before the thief cashes it in?

Do you like books with mysteries? If you do than this is probably the book for you. I really liked this book so I would give it five stars. I recommend this book from ages, 7-10. Also I recommend this book to anyone who thinks they lost something forever. I thought this was this was the best book in the A-Z Mysteries series because it was the most exciting and I couldn't put it down.