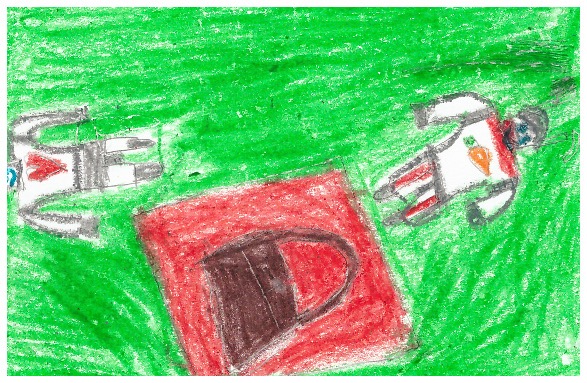 “ZAP!” Help Ricky free his mighty robot that is under a spell. You need to read this book called Ricky Ricotta’s Mighty Robot vs. The Uranium Unicorns from Uranus by Dav Pilkey.

To begin with, this book is an adventure novel and part of a series that are all easy readers but are still chapter books. This book was about the Uranium Unicorns trying to take over the world. Ricky Ricotta has a robot that was supposed to a world destroying robot but is actually a nice robot. The unicorns kidnap the robot and keep him in order to destroy the world because the robot is the only thing that can stop them. Ricky and his cousin (with her Jurassic Jackrabbits) fight to get his robot back and stop the unicorns.

In addition, I like this book because you can read the books out of order because they are very different. I like this because I can go to the school library and just grab one and go. My favorite part was when the lovebot ran away holding hands with the mighty robot. This part was my favorite because it was funny because robots don’t hold hands. When the mighty robot is captured, Ricky must go to his annoying cousin’s house to get the Jurassic jackrabbits. The Jurassic jackrabbits are interesting characters because they must save the mighty robot. In each book there is a flip/o/rama. It shows you where to put your hands so the flip/o/rama will work. I am in third grade and I still like these books. At the end of the book there is a how to draw Ricky and his robot section. These are some extra fun parts of this book.

In conclusion, I recommend this book for ages 5-9 depending on how much you like books that are kind of like comics. You could try any of the Ricky Ricotta books!