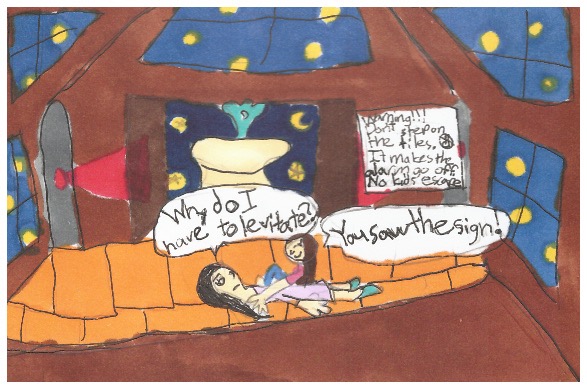 “Spinning eggs?!” Come join Abby and her friends on an adventure of a lifetime in Abby Carnelia’s One and Only Magical Power by David Pouge.

One day Abby is peeling a shell off of a hard-boiled egg when she notices that one of her earrings are missing. She touches both of her ear lobes while looking at the egg, and then voilà! The egg starts to spin. Abby soon has a passion for magic, and since it was almost summer, she joins a summer camp for magic. When the counselors find out about her power, she is transferred to a summer camp with a huge secret…

This is an amazing book. I love it. One reason is because the main character, Abby, goes through a lot of changes through the book. She goes from thinking magic is weird to magic being her life. She goes from being average to being one-of-a-kind. My favorite part was when Abby had to perform one of her tricks on stage. At first she was nervous, but she faced her fears and went on with the show. Everybody applauded for her and they continued the show. Something I find unique about this book are the powers people have. The power in most books are typical powers commonly seen in action books, like fire power, ice power, flying, (etc.). But the powers in this book are powers like spinning eggs, fogging up windows, and other unimpressive, small, useless powers.

In conclusion, this book is preferably for ages 8 to 13. It will interest you if you like magic, friendship and summer. If you read this, you won’t regret it!

Helena B.
is a student in
Mrs. Blaisdell's 3rd Grade Class