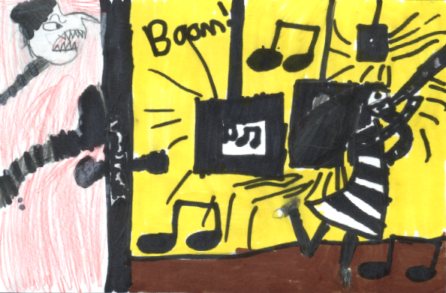 In the book, Lulu’s Mysterious Mission by Judith Viorst, Lulu is outraged when she finds out that her parents are going on vacation without her! Lulu instead gets a very, very strict babysitter named Miss Sonia Sofia Solinsky. Lulu tries to get rid of Miss Sonia Sofia Solinsky by jumping out the window and hiding. That doesn’t work. So, when she finds out that Miss Solinsky is allergic to cats, Lulu invites her friend, Mabel with her two cats for a sleepover at her house. But Miss Solinsky threatened to send Mabel to jail so she leaves. When Lulu finds out that Miss Solinsky is a retired spy, Lulu suddenly changes her attitude. Miss Solinsky says that she will teach Lulu to be a spy if Lulu promises good behavior. Read the book to find out if Lulu can behave long enough to become a spy.

I think that the author, Judith Viorst, is funny because every now and then, she jumps out and explains Lulu’s side of the story. For example, one time when we met Lulu’s trombone teacher, named Harry Potter and then explains that its not the wizard just a trombone teacher. I think that the illustrations are super. For example, in the beginning, there is a picture of Lulu screeching because she finds out that her parents are leaving. My favorite part is when Miss Solinsky breaks down the door, smashing her lamp, drawer, and chair. She also turns the trombone to dust. Then, Lulu finds out that Miss Solinsky is a spy. Those are some of the reasons this is such a good book.

I recommend this book to people who like to read about spoiled kids because Lulu, the main character, is spoiled and this is also a very funny book. It’s a very good book because it teaches you not to judge someone in a bad way. For example, in the beginning, Lulu was trying to get rid of Miss Solinsky just because she wanted her parents to come back. Make sure to buy this book because it is full of fun stories about Lulu.