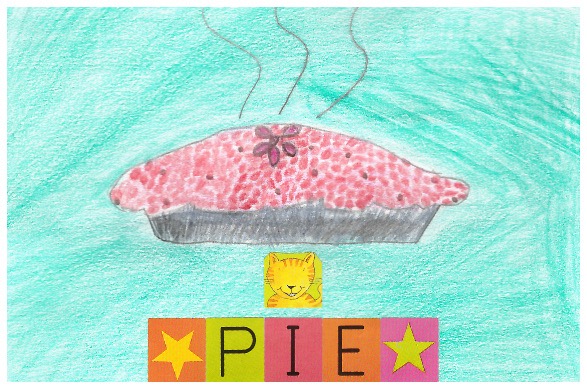 “Yummy! Yummy!” Come and get the best pie selections from the book Pie, by Sarah Weeks.

To begin with, Alice’s aunt Polly makes the best pies in Ipswitch. Her name is Polly Portman. Her pies are famous because she won 13 gold medals from The Blueberry Pie Contest and also because she does not charge for her awesome pies, instead she would receive ingredients from her clients to be able to make more pies. Alice and Aunt Polly were very close. They spoke a lot while Aunt Polly would be making her pies. When Aunt Polly passed, Alice fell like it was the end of the world because she fell more comfortable talking to her aunt then her own mother, even the people from Ipswitch missed Aunt Polly because no one knew how to make the pies like Aunt Polly did.

In addition, my favorite part is when Alice and her family found out that the Lardo Aunt Polly left the recipe was to the company LARDO that made the vegetable shortening not to Lardo Aunt Polly’s cat. This was my favorite part because both Alice and Charlie did a lot of things trying to solve the mystery of who would catnap Lardo and who destroyed the pie shop trying to get the recipe for the pie crust, and after all that the recipe was in a place no one ever imagined. After all the time Alice and Charlie spent together they became best friends, such good friend that Charlie named one of his kids after Aunt Polly. I also liked the book because at the beginning of every chapter there was a pie recipe and I can make it with my family. This made the book more fun to read. I would like to make the Peach Pie because it was Alice’s favorite pie. This book taught me that even though Aunt Polly could have been a millionaire by selling her pies, she thought it was best to just give them away because it was what would make her happy and that the secret to her pies was that she made them with love.

In conclusion, this book is perfect for kids age 8 and up. If you like a book with a little suspense and awesome pie recipes then weave your way through the library and find PIE.