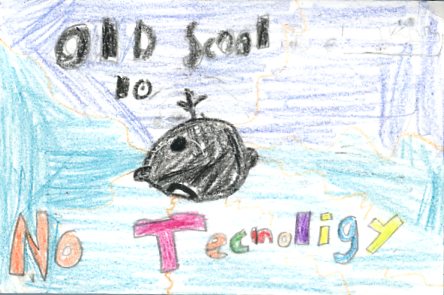 In the book Diary of a Wimpy kid Old School, by Jeff Kinney, Greg’s mom gives him an option to go to camp or turn off electronics for the weekend. Greg doesn’t want to go to camp. Greg’s brother still has nightmares from camp. Greg’s brother told a scary story to Greg. Does Greg go to camp? Does he turn off electronics for the weekend? Well you’ll have to read to find out!

I think that the Diary of a Wimpy kid Old School by Jeff Kinney is an amazingly funny book. First of all, there would never be a man to survive on birds and slugs which is just gross. One of Greg's friends told him this story. Second, your friend’s dad would never tell you to put a stick down if you were going to play with it. Also, your dad would never try to force you to open a microwave burrito by saying that you were stranded on an island with 1,000 microwave burritos. Greg is my favorite character because he's really funny and corrects people's grammar, and they get really mad at him for doing it. Will there be more hilarious parts? You’ll have to read to find out!

I recommend this book to kids from ages 8 and up.