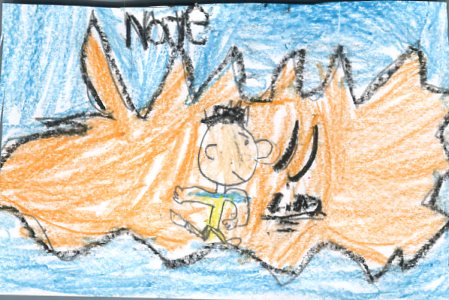 I`m reviewing Big Nate Strikes Again by Lincoln Peirce. In this book Nate gets chosen for one of the Baseball captains. Nate is also getting chased by a bully Randy Benancort because Nate keeps getting Randy in trouble. Nate gets hurt in a game and can`t play. Will Nate get away from Randy and win the game?

In my opinion I think Big Nate Strikes Again is a great book. First of all, the book is hysterical. For example, when Nate is in class he dresses up like Batman. Second of all, Nate gets great ideas. For example, Nate makes a car out of a block of wood. Finally, Francis and Teddy, Nate`s best friends are hilarious. For example, they make funny faces and say funny things. My favorite character was Nate because he is funny and does cool stuff like creating a Bat Mobile.