Big Nate: Dibs on This Chair

Big Nate: Dibs on This Chair 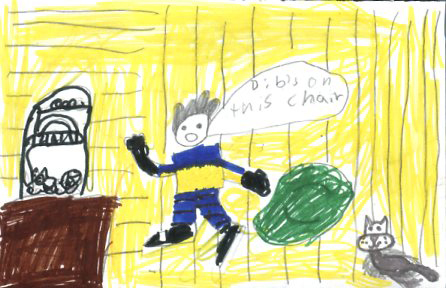 In Big Nate Dibs on this Chair by Jeff Kinney, Nate feels that his summer is going to be horrible because of summer school, but it turns out to be a great summer. Nate has two friend named Teddy and Francis. Nate is in summer school and that’s a problem because he not a fan of school in general. Nate meets a girl that he really likes. You’ll just have to find out what happens to Nate that changes his mind about summer school.

I think Big Nate: Dibs on this Chair by Jeff Kinney is HYSTERICAL! First, Nate makes hilarious jokes. For example, he made a joke about a pig to his friend Teddy, and Teddy laughed...so did I! Next, Nate tries to avoid summer school in a funny way. My favorite part was when the teacher wasn't looking, Nate climbed out the classroom window! Finally, Nate’s friends are very funny because they solve Nate’s problem in a funny way. Nate is my favorite character because I like his style and he made me laugh a lot with his actions and words.

I recommend this book to people who like graphic novels. Find out what happens to Nate that changes his mind about summer school!