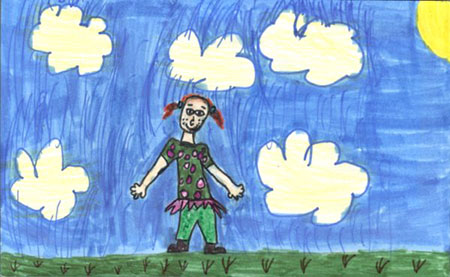 Have you met the most funny, but different child in the world? No? Then I think you should read, Gooney Bird Greene, by Lois Lowry. Just look at that interesting cover! One look at Gooney Bird and you will want to learn more about her.

In the book, Gooney Bird Greene moved to Watertower. She started school at Watertower Elementary. Her teacher was Mrs. Pidgeon. Gooney Bird loved telling “absolutely true” stories. For example, she told the class how her beloved cat, “Catman”, got consumed by a cow. The problem in the book is that no one believes her. She solves the problem by explaining her stories and proving that they are true! I liked how her classmates doubted her at first, but when she told the rest of the story, they believed her. Read the book to hear more about Gooney Bird’s amazing stories. You will love Gooney Bird’s stories!

Gooney Bird is absurd because she went to the principal’s office, but she was not in trouble! She has special meetings with him. Gooney Bird also wore PJ’s and cowboy boots on her first day of school, and a tutu with a polka dot t-shirt on her second day of school. So absurd!

My favorite part is when Gooney Bird tells the class how beloved Catman got consumed by a cow. The class was so interested in her story. Oh! You say there are two meanings for the word “consumed”? Well, read to find out which “consumed” it is. I liked how she tricked the class.

Camden B.
is a student in
Mrs. Moll's 2nd Grade Class