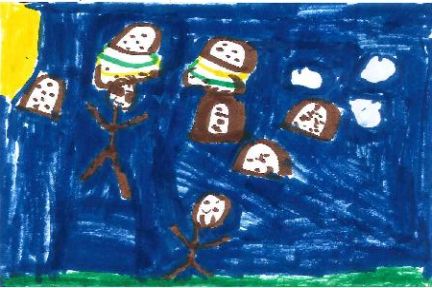 Cloudy with the Chance of Meatballs was about a lot of food falling down from the sky. People from the city Chewandswallow brought their glasses, forks, plates, spoons, knives, and napkins because that way they would always be ready for any kind of food weather. And the leftovers are for the fish, dogs, cats, and turtles, too. The animals got the food by people gathering the food for them. They put the food in the ocean for the fish and turtles.

I think that the book was fun! I think the book is fun because it was raining all of my favorite foods in the book. My favorite part of the story is when it was raining ice cream, apple juice, and apple pie. I wish that it could rain food in the real world, like pizza, ice cream, cupcakes, hot dogs, and donuts. Henry, one of the main characters, is a funny guy. I think Henry is a funny guy because he gets confused at the end, when he thinks the snow is mashed potatoes. His dad told him it was not mashed potatoes and then he said he knew it was snow. Henry said “we could almost smell mashed potatoes.”

I would recommend this book to anyone who likes funny books, like Miss Bindergarten Celebrates the Last Day of Kindergarten. I would also recommend this book to my friends, because I want them to see it rain ice cream, pizza and bacon and cheese. I think they would like to see it rain all that stuff because they probably would want to gather all the food and share it with other people. People who don't like comedy will not enjoy Cloudy with a Chance of Meatballs. People who don't like funny characters will not enjoy this book either.