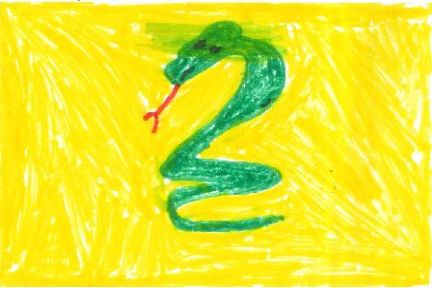 Sid gets a snake. He names the snake Jake. His mom has a doubtful face. Because houses and snakes don’t mix. Then the snake gets lost in the bed, everywhere in the house. They keep getting scared and they think they see him. The family members search for him. They find him outside in the hammock, on a pillow.

I didn’t like the story. Because I didn’t like the idea that they brought the snake into the house. Another reason is that the snake scared Sid’s mother. The father step on something and thought it was Jake the snake. Grandma almost fainted because she thought one of the noodles in the stew was Jake the snake. My opinion is that I didn’t think that it was interesting, because a snake isn’t an interesting animal to me.

I recommend this book to my schoolmates Solomon, Laiylah, Joshua, and Ronnie my teacher. They would like it because maybe they would probably want a pet snake or they would like to know what it is like. Someone like Sid’s mom would not like this book because the snake scared her. We can’t see this happening in real life, so the book is good if you like fantasy. People would also think the book is funny because it has funny moments, like when Sid’s dad sat on a hotdog and thought it was Jake the snake.