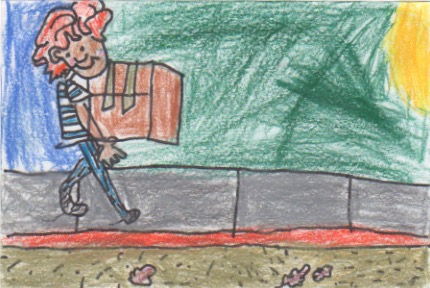 A boy named Henry feels excited that his cousin moves next door. Henry was sitting on his front porch and his dad had a surprise. He said that Henry’s cousin was moving next door. They cheered and cheered! They were so happy, but Annie was a bit nervous about all of her clothes and all of her other stuff. She thought they might get lost or damaged. When she arrived at Henry’s house, she had a lot of blotches on her head. When she’s nervous, blotches show up on her. Henry asked her why she had blotches on her head. Henry asked her if she was worried about her clothes and other stuff. She nodded. And Henry asked her about all of the stuff she likes. Three more blotches grew on her face. Henry knew what do do. He took a cover and Annie and Mudge snuggled up in it. They even fell asleep. Henry brought them food to eat and drink and he even brought a moving man. That helped her feel better. You’ll have to read the book to find out more details.

I think this book is interesting because it is about moving. I like the illustrations because they almost look like real photographs. My favorite character was Henry because he is kind and caring. The author can make some adjustments by making a very special ending or a very happy part. It was an awesome book! In my opinion, it is a very cool book. Maybe your opinion is different, but that is my opinion. I like the part when Henry’s dad had a surprise and told the family the surprise and they cheered and cheered and cheered and cheered for about an hour. It was awesome for a book! I think the characters’ behavior was good. All of them were very kind, especially Henry. For example, Henry is nice when he brought a moving man to Annie so she could come down. That was the part when Annie felt more relaxed and had no more blotches. Henry is caring and loving and very nice for a young kid. For example, he thought about Annie and how many times he has to wrap her stuff around with sparkly tape.

I recommend this book for kids in first to second grade because it has little chapters and small sentences that makes it easier to read. It was not long to read, no long chapters at all. I recommend this book to people who like their cousins and like to switch neighbors. I also recommend it to people who like to help others. People who are caring and loving should read the book. If you like Henry and Mudge books, this is the perfect book for you and if you like Cynthia Rylant, this is also perfect for you because it is one of the best of the best of the best.

Luca K.
is a student in
Pam and Carly's 2nd Grade Class