Commander Toad and the Planet of Grapes

Commander Toad and the Planet of Grapes 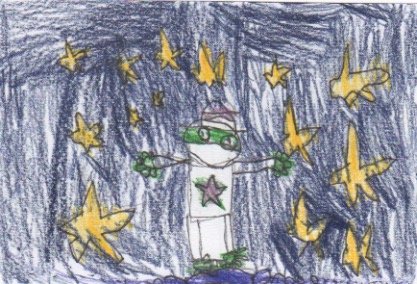 Commander Toad is a leader who flies a spaceship. He is brave and bright and funny. One time he found Grape Land and found giant grapes. A grape ate him! His partner saw it and she was really scared so she ran to the crew and told them what happened. Then they came back. They rescued him by using some strange antidote. There’s a really funny ending that you can find by looking in the book. Yay!!

I liked this book because it has massive grapes! That to me is weird and funny. It’s pretty cool because it has space and I like space. Commander Toad is the main character because he’s the leader and the crew loves him. He is a joke character because he made a grape joke so he’s a funny character. On a scale of 1 – 10, my rating is a 6 because I don’t think it’s the best book but it’s good and funny. Maybe it will be a popular book. Maybe, maybe not. I don’t know yet, but it’s a really funny book. In my opinion, the funniest part is when it has a grape eating the Commander. I thought that part was really funny. It’s my favorite part. Grape jokes, haha.

I recommend that this should be read by kindergarteners, first graders, and second graders. I think kindergarteners would like it because it’s very funny and has lots of jokes. I believe this is for both genders because girls and boys all like jokes, right? Plus I’m a boy and jokes are for everyone. Also, it’s probably for first graders and for my grade (2nd grade). You should read it. I would say this is the best book ever! I recommend to this creator to make a second book and the creator should make a third book, a fourth, a fifth, a sixth, a seventh, and more. I wish there were 100 Commander Toad books!

Finny E.
is a student in
Pam and Carly's Class