Cool Zone With the Pain and the Great One

Cool Zone With the Pain and the Great One 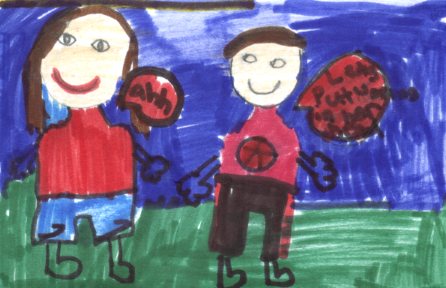 The “Pain” and the “Great One” are brother and sister and they don’t get along very well. The “Pain”, also known as Jacob and the “Great One”, otherwise known as Abigail, each think their parents like the other one better. That’s why they fight a lot. In the book Abigail loses her brother`s tooth because everyone wanted to see it, but someone steals it. So her brother gets really angry at Abigail and he thinks the tooth fairy will not come. Another time when Abigail gets off the bus, Roger, Abigail`s enemy, puts worms on Abigail`s head and she gets really mad and frustrated at Roger. Abigail’s class holds a breakfast for their families. She is not happy that Jacob is coming. Read the book to see if they can get along while Abigail’s class has the “Breakfast Café.”

I really like this book because it is funny. For example when it was bring your pet to school day Lila brings a real dog, when only stuffed animals were allowed. The dog keeps barking at the students and the dog had to be sent home at lunch time. The illustrations in this book help me understand the story better. For example there's one picture that shows a dog barking at the whole class during "Bring your stuffed animal to school day." It really me understand that this dog was really out of control. Abigail reminds me of myself because she is helpful. For example she tells Lila, the girl that brought the dog, that she wasn't supposed to bring a real dog, but a stuffed dog instead. That's something I would have done too.

I recommend this book to 3rdgraders-5thgraders who like funny books about siblings. The “Pain” and the “Great One” do fight but they also work it out. I would give this book 5 out of 5 stars. I hope you read the book and enjoy it.