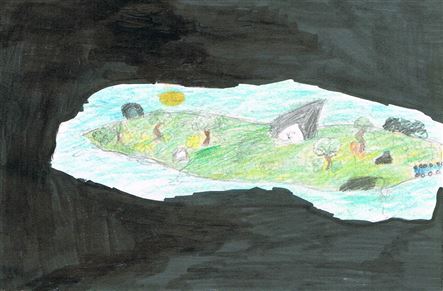 I am Karana. My brother and I were getting roots for our village. We lived on the Island of the Blue Dolphins. It was a normal day on the island until I saw a ship with red sails coming toward our island. I had never seen a ship before. Then my brother saw it and thought it was a huge whale. He wanted to run, but I said to him, “When we cook the roots you’re not going to have any because you didn’t finish helping me.’’ So he stayed and poked the ground with his stick. When the ship got closer, Ramo, my brother, was about to drop a root in the basket. But then he saw a canoe coming toward the island. He dropped the stick and ran away, and I wanted to do that too because I was very excited. The ship could hold many things. When I filled my basket with roots, I went to the village and by then everyone already knew about the ship. Women and children were hiding by the mesa. My brother and I looked down at the beach and saw our father, Chief of Ghalas-at. Ghalas-at was the name of our village. Our father told the strangers that he was Chief Chowig. I don’t know why he did that. In our tribe everyone had two names: a private one and a public one. Chief Chowig was his private name. He was talking to the Russian man. His name was Captain Orlov, and he came to our island to hunt otter. He said, “You can have a part of the otter we catch because it is we who are taking a risk by hunting them.’’ My father said that the parts should be equal. I did not hear the rest of the conversation because I was filled with excitement. I accidentally kicked a rock down by Captain Orlov’s feet. Everybody stared at me. I ran far away from the mesa with embarrassment.

I loved this book because if something bad happened it meant that something sweet was coming up. In my opinion it’s the author’s way of telling you something important is going to happen. The characters are very interesting because if you compare Captain Orlov to Karana they are very different. Their attitudes are different. Karana doesn’t feel like she owns the island, but Captain Orlov walks around like he owns everything. One of the lessons I learned from this book is that you should always try to sort things out because things might not end well if you don’t. I think readers who like rebels might like this book because Karana knew she wasn’t supposed to do something, but she did it anyway.

I recommend this book. I think this book is for 3rd grade and up because it’s easy to comprehend the book. But for first graders some of the words in the story might be hard because the words 3rd graders and up know first graders might not know yet.