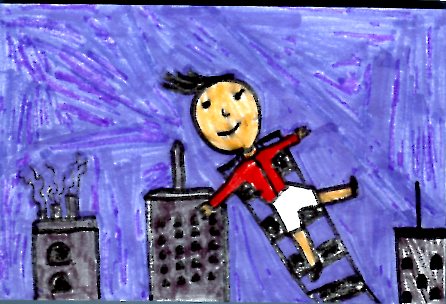 This book is about a boy who likes to build a lot. When he got into second grade his teacher said that no building was allowed in class but he didn't listen to her. Twelve long days passed and his teacher took the kids on an old fashioned picnic. They crossed a bridge over a burbling stream just in time before the bridge collapsed. Then the teacher fainted. Iggy Peck had a brilliant plan and made a bridge for his teacher. After that she allowed building in class.

I like this book because you see Iggy Peck get better and better at building. I liked the part when he built a bridge for his teacher. My favorite character was Iggy Peck because he never changes and continues to build. I liked the characters because they were all different, except for the teacher because she was mean to Iggy. Kids should read this book because it teaches you to follow your dreams.

C.R.
is a student in
Mrs. King and Miss Holzer's 2nd Grade Class