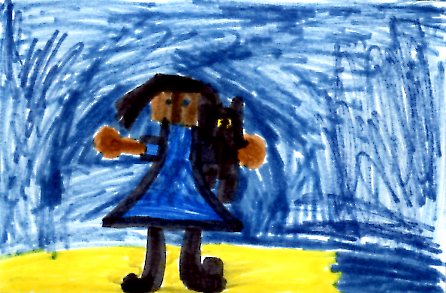 This is a book about a girl named Sam who lies a lot and one day her lies, which her dad calls moonshine, get her in trouble. Sam has a friend named Thomas who believes everything Sam says. For example, she said that her mom was a mermaid even though she's dead. Sam said that she had a lion and a baby kangaroo. Then she said that the kangaroo was at the lighthouse or in the trees. One day she sends Thomas to Blue Rock to find her mermaid mother. Bangs, Sam's cat, went with him and when Thomas was riding his bike, a storm hit. A wave came and Thomas's bike got washed away. Sam's father came home and said that she sent Thomas and Bangs to Blue Rock. Her dad left to save them. When Sam's dad got home he said that Thomas was okay but Bangs got washed away. Sam went to bed crying but then she saw a cat in her window. It was Bangs! The next day, Sam saw a small four legged animal, which she thought was a baby kangaroo. Her father said it was a gerbil. Sam decided to give it to Thomas, who was sick at home with laryngitis. She named the gerbil Moonshine!

I liked this book, even though it was sad halfway through the story. You thought Bangs got washed away and Thomas was sick at the end. It was a good story because in the end, everyone was alright.

I would recommend this book to people who would be okay with some sad parts in the story. It is a good story for children so they know not to lie.

D.B.
is a student in
Mrs. King and Miss Holzer's 2nd Grade Class