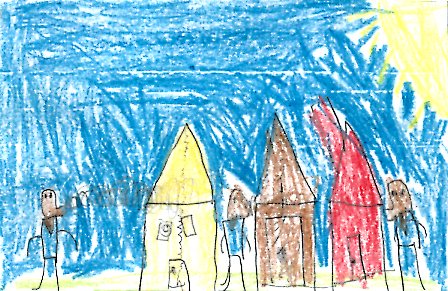 The Three Little Pigs and the Somewhat Bad Wolf is a story about three pigs and a wolf. At the beginning of the story the three little pigs leave the farm they were living at. The pigs need to build houses but the first two pigs like to spend their money on food. So their houses aren't really strong. The third pig doesn't waste his on food. He spends it on materials like bricks t o build his house. The wolf comes to town and is hungry. All of the people who own restaurants close the restaurants and won't let the wolf in. The wolf gets mad. He smells pigs. He blows down the first pigs house. The pig escapes. He blows down the second house and that pig escapes. But when he gets to the third house, he tries to blow it down but falls on the floor because he is tired. The pigs are nice to the wolf and give him food.

My favorite part of the story is when the pigs are nice to the wolf because in the other books I've read the pigs don't give him any food. They eat him.

In my opinion this is a good story because it has a lot of talking animals.

I recommend this story because it's funny when the wolf falls on the floor when he tries to blow down the brick house.