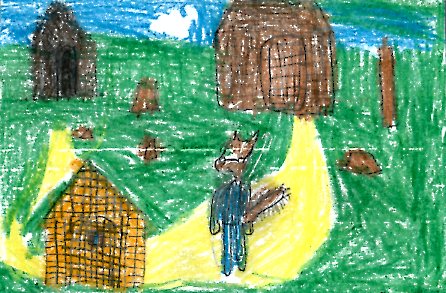 The wolf was trying to make a cake for his grandma and couldn’t because there was no sugar left. He walked for a cup of sugar. There was a pig. The pig built a house out of straw. The wolf called little pig, little pig, are you in? His nose started to itch. He huffed and snuffed and sneezed a great sneeze. The house fell down. The pig was dead. So the wolf ate the pig. He went to the next house which was made out of sticks. He rang the bell but no one answered. He called Mr. Pig, Mr. Pig, are you in? The pig said I’m shaving the hair on my chiny chin chin. He felt another sneeze coming. The house blew up and he ate the dead pig. He was very full but he went to the next house. The pig built his house out of bricks. He knocked, no answer. He said little pig, little pig, are you in? He huffed and snuffed and the house didn’t blow up and the wolf ended up in jail.

I like this book because it was a good book and it was fun. I like this version of The Three Little Pigs best. My favorite part was when the first pig sneezes and the house blows up and all you see is the pig's tail sticking out of the straw.

I think other people would like it especially when he gets to the brick and can't blow it down. He keeps sneezing and the cops come and arrest him.