Written by A .A. Milne 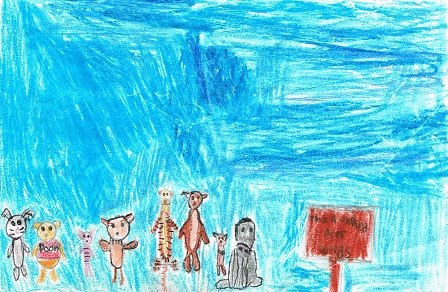 My book review is on The House at Pooh Corner. It's about Winnie and his friends that are stuffed animals. But all of these stuffed animals are Christopher Robin’s. All of these animals are of course not real. They are stuffed animals, but Christopher Robin thinks they are real. This is the last book of the Winnie the Pooh series so this is the book when Pooh and his friends have to say goodbye to Christopher Robin. And since Christopher has to leave, he and his friends go to the Hundred Acre Woods and see and do things that that you wouldn't see every day. For example they run into something called a heffalump. A heffalump is a monster-like thing. And a tiger tried to climb a tree. There are a lot of characters like: the tiger in the story called Tigger, the pig called Piglet, the donkey called Eeyore, the rabbit just called Rabbit, the kangaroo called Kanga, and the joey kangaroo called Roo. They all are best friends. Read the book to learn more.

I like the story The House at Pooh Corner because it's a very detailed story but there are not a lot of complex words in it. My favorite character is Piglet because in my opinion he is the nicest character in the book. Some things that you might read about in the book are shyness, hunger, happiness, depression, and love. At points in the story it reminded me of real life because Pooh’s friends are very sweet and my friends are nice also. As the story went on the characters got happier and everyone likes a happy ending.

I recommend the book The House at Pooh Corner because I think it's a good story and there are a lot of pretty illustrations. I think this book is for all ages because the book is very detailed but there aren't a lot of complex words.