The Three Little Pigs and the Somewhat Bad Wolf

The Three Little Pigs and the Somewhat Bad Wolf 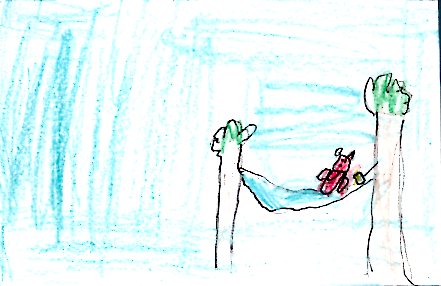 The Three Little Pigs and the Somewhat Bad Wolf is a funny story. The pigs have to leave the farm when the owners decide to move to Florida. They pay the pigs for their good work and leave. The first pig just wants to buy potato chips with his money, but he ends up building a house of straw (with money left over for potato chips). The second pig wants to buy soda pop with his money, but makes a house of sticks (with money left over for soda pop) The third pig used most of the money to build a sturdy house of bricks and could only buy a sandwich. A wolf got hungry and tried all the food places and they were closed. He goes to the first pig's house and knocks. The pig says you can't come in and the wolf huffs and puffs and blows his house down. Well, if you want to know how it ends, read the story to find out.

I like this story because it is funny and the characters say funny things. One thing that was funny was when the pig said he wanted to just buy potato chips. One funny part was when the pigs takes a mud bath! It's a great book. I read other Three Little Pig stories and I liked this one because some things were the same but some things were different.

I recommend this story because it is funny. The characters do funny things. It's a book that kids would read.