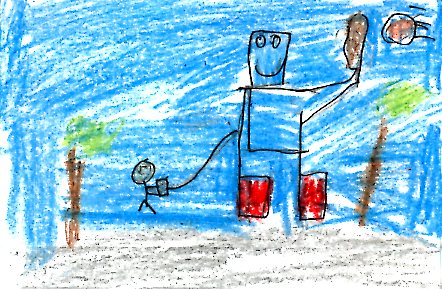 This story is about a boy named Randy Riley. Randy stunk at baseball but liked stuff about space. He realizes that a giant meteor is going to crash on the Earth. Randy was a genius and he builds giant robots that look like baseball players. Even though Randy wasn't good at baseball the robots were! His plan was to have the robots knock the giant meteor back into space and save the day! If you want to find out if he saves the day, read the book.

I like this book because it is cool and funny. I liked the part when he builds a robot that needs 97 batteries because it was funny. I also liked the part when he plays baseball because he was daydreaming and the ball went right by him. A funny part is when his mom drops his breakfast when she hears on the radio about the meteor that is going to hit Earth. The picture looked like a smiley face when the bacon and two eggs went flying in the air.

I recommend this book to first, second, and third graders because it is easy to read. The pictures are about baseball and outer space. It is interesting and silly. One of the best parts is that the whole story rhymes.