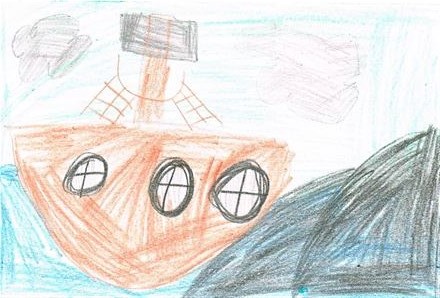 Treasure Island is a book about a boy named Jim Hawkins and his life. It starts when a mysterious man comes to the hotel that Jim and his family live in. This mysterious man called himself the Captain. He was a very grouchy person, but he was hiding something! One day a strange man came to the hotel looking for the Captain, and he only had two fingers. The mysterious man said that his name was Blackdog. He and the Captain started fighting, and Blackdog ran away.

The next day, a blind man came and gave the Captain something. It gave the Captain a stroke, and he died. After that, lots of people asked to see the Captain but Jim and his mom did not let them because he was dead. Instead they decided to see what the Captain had with him. He had many things like money, clothes, and things from far away lands, but the thing that interested Jim most was the map that had notes that seemed to lead to something important. Jim and his mom decided to take some gold and the map. Then they went to a place where they would be safe from all the people who had been looking for the Captain.

Jim and his mother talked to the squire of the town. The squire said that he and his friend, the doctor, and his servant should go and look for the treasure, so Jim went with them to find a ship. The next day, Jim went to say good-bye to his mother. Later in the day, he met the crew. First Jim met the cook, Long John Silver. Next he met the captain and the rest of the crew. The next day they all set sail. Did they find the treasure? Who was the Captain? Read the book to find out what happens.

I liked this book because it is very calm in a way, even though it is an exciting book. There are lots of plot twists to keep you interested. I liked most of the characters, but I thought the squire was childish and annoying. I especially liked Long John Silver because he surprises you. This book taught me that you should not judge people at first sight. You should get to know them before you decide if you like them or not. The personalities of several of the characters in this book are not what you think when you first meet them. This book is not like any other book I have read. I thought this book was unique because it has a good narrator and is set in a different time period.

I think you should read this book because it has so many plot twists. People who like things like pirates and treasure would like this book. I think students in third through sixth grade would enjoy this book. The writing style is very clear. It is interesting, but it is not difficult to understand.