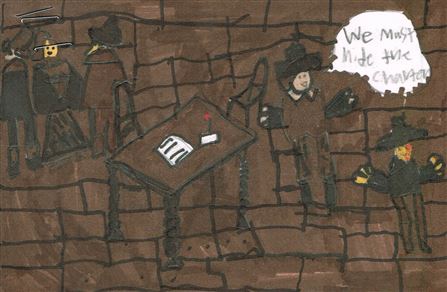 A girl named Kit comes from Barbados to America. She goes to live with her aunt and uncle and two cousins in America because her grandfather died. The other people in the community thought she was a witch right away after seeing that she was able to swim. One day Kit was in the meadows and she saw a house. It was Hannah Tupper’s house. Everybody thought that Hannah Tupper was a witch. Kit went into Hannah Tupper’s house. She kept on going there after she saw that Hannah Tupper was a nice person. One of Kit’s friends on the ship to Wethersfield came to the meadows too, and became friends with Hannah. His name was Nat and when he was a child he ran away from the ship because his dad was forcing him to go to school. Nat wanted his dad to teach him onboard. Then one day when Kit goes to Hannah’s house something important happens. I don’t want to spoil the rest so I am going to skip that part. Finally Kit is put on trial and must go to court for being a witch and you will have to read the whole book yourself to find out if she is guilty or not.

I like Nat because he is nice and helped Kit get away when the townspeople were chasing her. He also helped Prudence, Kit’s student, to learn how to read and write and was always there for Kit. I think the book is good because it goes slow, it explains a lot of things, tells you about some of the Puritans’ activities, and has a lot of detail. I also think it’s good for nine-year-olds and up because a lot of the words are confusing, even for me.

I recommend that you read the book because it can show you what it was like for the Puritans and what they liked and didn’t like. It tells you some history like what the charter of Connecticut was and that the Puritans believed in witchcraft. I think people that like books with Puritans in them and like history would enjoy The Witch of Blackbird Pond. What might interest the readers is when the charter gets stolen and when Kit has to live with her aunt and uncle and two cousins. When the charter gets stolen a lot of crazy things go on. People might like Mercy because she is a kind person. And that’s why I recommend that you read this book.