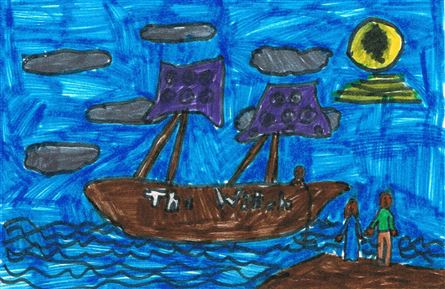 Kit is a girl living in Barbados. When all her family dies she has to move to America to live with her Aunt Rachel and Uncle Matthew. On her ride on a ship called the Dolphin she meets Nat, the captain’s son. On her way to America she also meets John Holbrook, a man who wants to go to Harvard. When she gets to America she meets Mercy and Judith, her Aunt Rachel’s daughters. One night she meets William, a rich man who Judith likes. In this story Kit finds out which boys like which girls. It gets twisted around a lot and you’ll have to read the book to find out who ends up with who. While she’s trying to fit in in America she goes through lots of adventures, like meeting a lady named Hannah Tupper who everyone thinks is a witch. If you want to know what happens to Kit, you have to read the book.

I really liked this book because it was really interesting how there was almost always something exciting happening in the book. I liked how there were a lot of adventures and there was something exciting at the end of each chapter. I liked Kit the most because I think she was very brave to come to America by herself. I liked how at first she did not fit in with America but later she fit in with America more. One of the characters that changed was Prudence, who is a girl Kit teaches to write and read. Prudence changes because at first she’s really shy and won’t talk at all. But Kit helps her and soon Prudence is asking questions of people and talking to them more. This book made me feel happy because all the characters had a really happy ending. The story made me wonder about what happens at the end of the book.

I recommend this book. It’s a really good book for people who like books about adventure. It is also good for people who want to know more about what life was like in the 17th century. I think this is a good book for readers 9 and up because it has some complicated words and the way they can tell you stuff in the book can get confusing. I think it might interest readers because there are a lot of twists and turns and it has you asking questions throughout the book. Also, the characters are interesting because lots of them change from the beginning of the book to the end. For example, Prudence was really shy at first and later she wasn't as shy. I also think it’s cool that the book is based in the 1600s.

Anna K.
is a student in
Mrs. J's Class