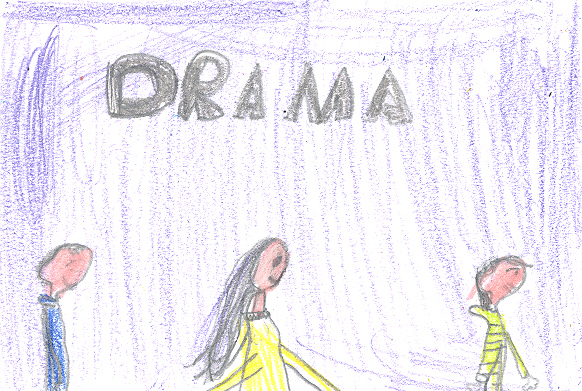 Lights! Camera! Action! The book Drama by Raina Telgemeier is ready to go on stage!

To begin with, this story was about a girl named Callie. She works backstage at her middle school productions. In this story, she is working for the musical called Moon Over Mississippi. She would have tried out to be in the play, but she's a terrible singer! So her job is set designer and she wants the set to be the best one ever. Once the people in the musical are chosen, things get kind of crazy. No everyone on her crew gets along, the actors are full of drama, and they are not selling enough tickets to make for a good show. Callie has to fight through many problems to try to make the show a success.

I really liked this book because Callie is an interesting character. One time, she was so hungry while working that she bought every snack in the vending machine! Then she was full after only one bag of chips. My favorite characters are Callie and Liz who works with her. They make a great team and they make the book funny. This books reminds me of my cousin. She was in a school musical just like the one in the story.

In conclusion, I recommend this book for girls third grade and up, especially if they like DRAMA! You won't be disappointed!