I Survived:The Shark Attack of 1916

I Survived:The Shark Attack of 1916 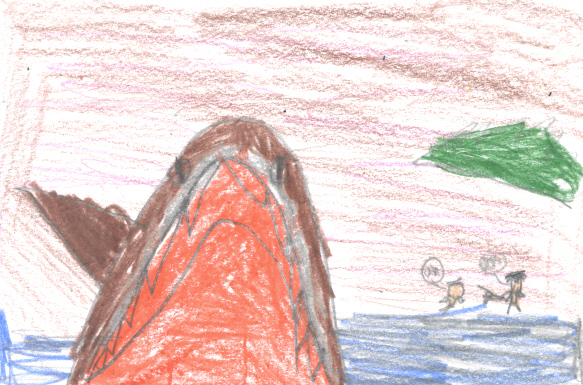 Splash, splash!! I don’t want to hear that sound if it’s a shark! Check out the book I Survived the Shark Attacks of 1916 by Lauren Trashes.

It all starts when Chet went to Uncle Jerry’s coffee shop. Chet saw his friends that showed him a newspaper headline that said, KILLER SHARK ATTACKS SWIMMER! Uncle Jerry said sharks rarely attack swimmers. They were listing to how the captain was on a ship in a heavy storm. The storm cut there ship in half. The captain became stuck on a barrel in the water and was being chased by a great white shark. He survived by being brave!

Second of all, I thought Chet was interesting because he wasn’t afraid to jump into the water when a BULL SHARK was in there. His leg was bitten by the bull shark. I have a connection with Chat because we have seen a bull shark and swam in a lake with one. But I have never been bit by one! I thought the book was AWESOME because I think sharks are cool and dangerous. I liked reading about all of the biting experiences. I thought making a trail of ketchup was a good idea. I thought it was a good idea because it looks like blood and the book states it looks like the shark ate him.

In conclusion, any kids who enjoy reading about sharks or large fish that could be dangerous should read this book. It might help keep you safe too!!