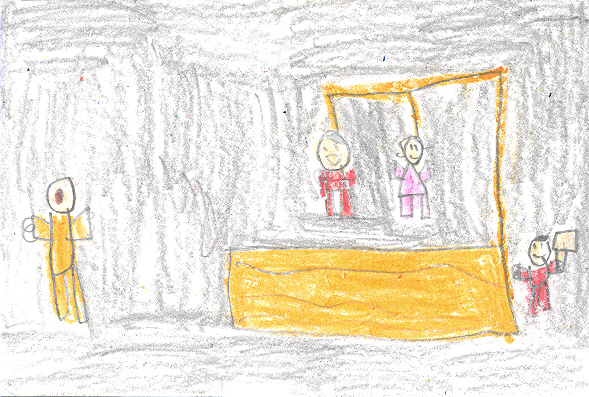 Hi-yah! Punch! If you are looking for a book with crazy adventures and awesome characters, get the book The Lost Hero by Rick Riordan.

To begin with, a boy named Jason wakes up with no memory at all. When he wakes up he is holding hands with a girl (daughter of Aphrodite). He says to her, “Who are you?” She thinks he is just playing a game with her so she says, “My name is Piper.” Then, Jason’s best friend Leo comes over to them. He asks Jason if he’s all right and tells him he looks pale. Leo is the son of Hephaestus. Jason tells both of them that he doesn’t know where he is, who they are, and he doesn’t even know who he is! To restore his memory, he must free the goddess Hera from giving all of her power to let the king of giants come to life. This becomes the quest that this book takes us on. Along the way Jason gets some of his memory back. If you are dying to know more, you have to read it!

In addition, my favorite part of the story was when Jason and Piper got captured by three Cyclopes. Leo had a magical belt that would give him anything he wanted so he got a hammer and knocked out the Cyclopes and freed Jason and Piper. This was my favorite part because I liked how Leo thought how to free them. As I read this story, I wondered what the three demigods (kids) going to do next. This was a long book, but I never stopped reading because I wanted to know what would happen! I liked this story so much! I enjoyed all of the dreams and fighting. There was non-stop fighting between the kids and the creatures they met along the way.

I recommend this book to all ages. If you liked what I said about the story and you agree the characters are awesome, then get the book The Lost Hero by Rick Riordan.