Junie B. Jones and a Little Monkey Business

Junie B. Jones and a Little Monkey Business 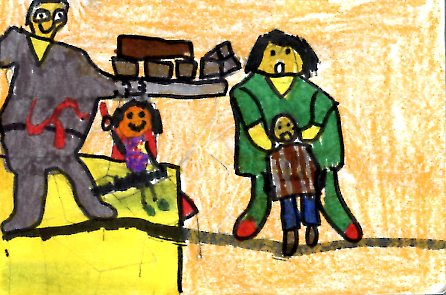 Junie B.'s mom was going to have a baby. Junie B. thought the grandma said he was a monkey. They had to pick a name for the baby, and Junie B. suggested sill names. After the baby was born, Junie B.'s friends wanted to see him, so they were giving her lots of stuff. June B. got a locket, a fake diamond ring, a snack, a ticket, and shoes. Her teacher found out about what she took and she had to return everything. Her teacher put her in the bad kid's chair and then knocked on the principal's door. Then Junie B. went inside and talked to the principal and found out her brother wasn't a monkey. Her grandma just meant he was cute.

My favorite part is when the family picks a name for the baby and Junie suggests Mrs. Gutzman as the name because it's funny. My favorite character is Junie B. because she has weird names for people, she's funny, and she acts silly. I have a younger brother so this story relates to my life. When my brother was a baby, many people wanted to visit him just like Junie B.'s friends wanted to see her brother. This story has pictures and they help since they show Junie B.'s interactions with her friends.

I think others should read this story because there are funny names in the book.

Jaden F.
is a student in
Mrs. Okamura's Class