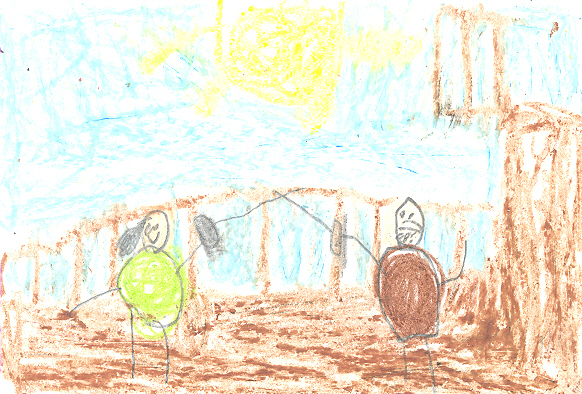 Have you ever wondered what it is like to be a pirate? Then yo ho matey, Magic Marks the Spot by Caroline Carlson is a great book for you!

Our adventure begins with a girl named Hilary who escapes from Miss Pimm's Finishing School and joins a team of swashbuckling pirates after responding to a billboard ad. Hilary must make a deal with the captain so she can join the team. She and another recruit named Oliver are welcomed to the team as their newest "scallywags." Pirate captain Jasper, Charlie, and the Gargoyle set sail with the new recruits on "The Pigeon" on a quest to find magic on Gunpowder Island. It turns out that the Royal Navy is out for them and attemps to sink their ship and send it to Davy Jones' Locker. The team of fearsome scallywags experiences capture, release, love, loss, and victory with twists and turns along the way. Readers will like this story because it is full of action, has an interesting plot, and is really fast-paced . The big idea is that being a pirate can be very exciting!

I liked this book because it was thrilling. For example, when the fight on a deck of a ship happened, I was really excited! Another reason I like this book is that it has many fun characters such as Hilary, Jasper, and Charlie. The book reminded me of when me and my friends would play "sword fight" at my house. As I was reading this book I wondered why Hilary wanted to be a pirate in the first place? [Spoiler: you find out later.]

In conclusion, I recommend this book for its humor and its constant action and adventure. People who like the concept of pirates should read this book. I believe that boys will enjoy this book more than girls, because of all the action. And there is barely any romance. These are just a few reasons why Magic Marks the Spot is an amazing book.

Quinn B.
is a student in
Ms. Buckner's 3rd Grade Class