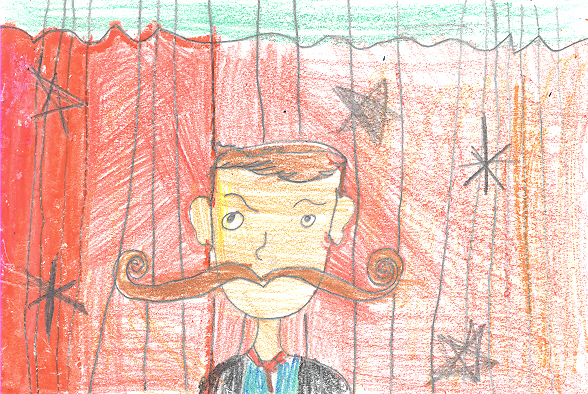 If you want a funny book with lots and lots of action, you should read Fake Mustache written by Tom Angleberger. You will think it is amazing!

To begin with, the book Fake Mustache is about a kid who just goes to a store called Steven’s Fair Point Store. He finds a fake mustache. He’d always wanted a fake mustache! This was a sign he might get out of control! The boy’s name is Casper and after he gets the mustache he starts robbing banks and teams up with an evil villain. They make many wild plans, but they don’t always go the way he thought.

After that, my favorite part is when Casper’s friend walked into a room and saw all the money he stole. In real life this reminds me of when I got caught emptying out my pink sparkly piggy bank. My sister didn’t tell on me though! Casper’s character changed a lot during the story because he finally started to feel bad when a friend figured out what he was doing. This made the story change too because of what happens at the end. Also, I really liked this book! I never wanted to put the book down because of the exciting action such as when Casper was about to rob a bank and the villain’s car broke down.

In conclusion, I recommend this book to ages 8 and up. You will never want to put this book down either!