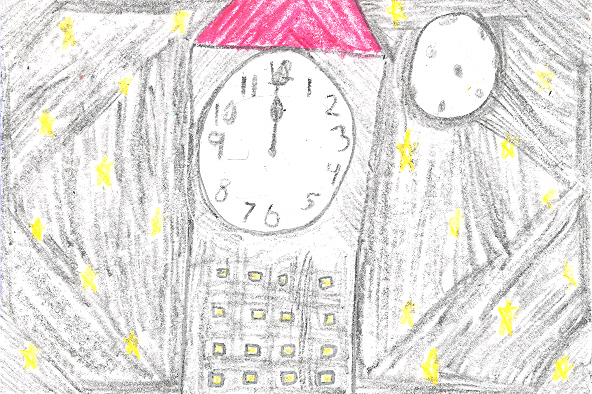 “Have you ever lived in a clock tower?” Come read about Hugo in the book The Invention of Hugo Cabret by Brian Selznick.

To start off, Hugo was an orphan. He lived in a train station clock network, winding, oiling, and setting the clocks. Hugo also had a broken automaton. His father, long ago, had found it and fixed it. Then, it broke again and Hugo had to fix it. A toymaker worked in the station and caught Hugo stealing a toy, so he took Hugo’s notebook! If you want to find out more, then read the book!

In addition, this book made me feel suspense. I was really in suspense when the toymaker took Hugo’s notebook because the toymaker said he’d burn it, so I didn’t know whether or not the toymaker would burn the notebook. My favorite part was when Hugo had the key to the automaton and turned it. The automaton started drawing and Hugo watched it as it finished. This book is special because of its illustrations. This book’s illustrations are black, grey, and white and they’re sketched so they look very amazing.

In conclusion, I recommend this book for people who are 8 and up. It’s also great for families. If you’re interested in books with illustrations, suspense, and danger, then why don’t you read The Invention of Hugo Cabret by Brian Selznick!