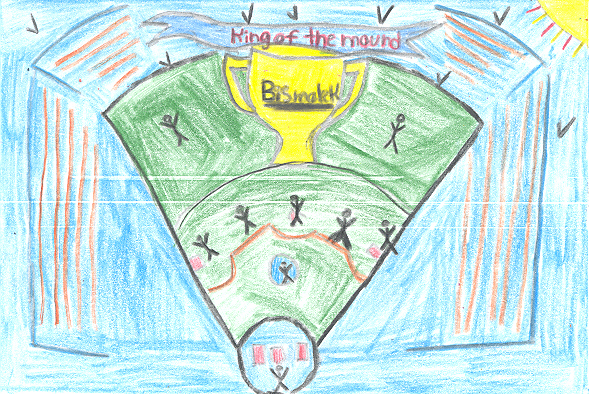 Bang!!! Come join Nick in the King of the Mound by Wes Tooke.

Nick is a young boy that has blue eyes, blonde hair and is also skinny and tall. Nick liked playing baseball with his dad. One day he woke up with a high fever and was taken to the hospital, and as soon as the doctors heard about Nick’s symptoms they knew he had Polio. Even though Nick was lonely, sad and had Polio, he would still throw the ball in the hospital room to keep him going. The day he dreamt of over a thousand times in the last year that he was in the hospital, finally came. His dad came to pick him up. Nick’s excitement only lasted for a minute because his dad called him a crippled kid. Once he was home he got to spend a lot of time with Satchel Paige, a pitcher that played for Bismarck, the town’s baseball team. Satchel teaches Nick to overcome any obstacles like when he couldn’t play Major League Baseball because of his skin color. Nick learns from Satchel to pitch by looking at the batters knee. Nick also meets his next door neighbor, and they become friends. Her name is Emma. They like to throw the baseball without talking. Emma always notices when Nick is having a bad day and takes him to different places like her favorite lake, or the ice cream shop for Nick to do something different.

One of my favorite parts is when Nick gets to pitch again. This was a great part because it showed Nick was getting better. I also got really excited when Bismarck makes it to the tournament and does very well. This reminded me of when I am in football games and try really hard to win. But most important, was the part when his dad tells Nick he is tough. This helps Nick with his confidence level and may be strong enough to help Nick pitch again.

In conclusion, this book would be perfect for kids who think they’re not capable of doing anything due to an illness or any obstacle. If this is the case, then weave your way through the library and find King of the Mound!